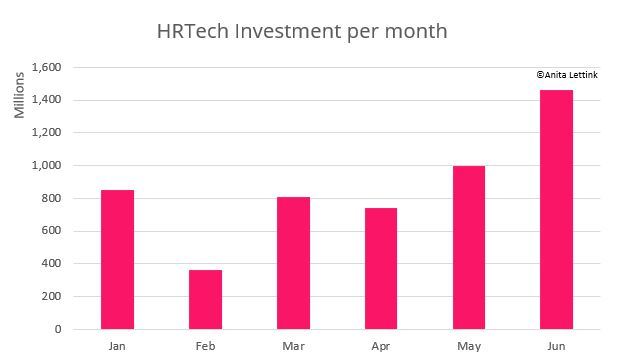 Did you realize that the HRTech space received $5.2B in funding rounds during the first six months of 2021? That amount already exceeds the whole of 2020!

I track all HRTech investments because I want to understand the trends. Which companies did investors think were promising enough? You can read about it in this article, including supporting charts. You’ll find a definition of what I include in “HRTech” at the end.

$5.2B for HRTech solutions is an all time record both in terms of volume and value – even though 2020 was a good year, we’ve never seen anything like this!

2021 started strong, with close to $1B in investments happening in January. As the chart below shows, the month of February was slow and a bit of an exception, but was more than made up for in June.

And I can already tell you that despite the summer holidays, July doesn’t show any signs of a slow down. I don’t dare to forecast where this will end in December: are we going to hit $10B for the year?

A couple of observations:

The largest funding round was $270M for Paycor, while cwallet took home the lowest amount. When you look at all the individual investments, the amounts are relatively well spread: appr. half of them are over $10M and half of them below. Because of the enormous spread in funding amounts, I didn’t calculate an average.

And there were 4 companies that announced a funding round but didn’t disclose the amount.

The investments went to 129 companies in 24 countries. Most of them are headquartered in the US (76) with the UK being a distant second (16).

I know two countries with a lively HRTech scene: Belgium and India. While India is represented with one investment for Darwinbox ($15M), no Belgian company publicly announced a funding round.

One explanation might be that most investments remain private. Another that emerging companies are often acquired. But with so many HRTech companies located in Belgium, it might be the “forgotten” space and investors should take a closer look.

When we look at the total amount of funding per country, the chart changes a bit but not much. Unsurprisingly, the US firmly remains in first place. But even though the number of deals in China was only 2, the amount invested per deal was high, moving the country to third place.

So what HRTech categories did investors think were interesting enough to invest $5.2B in? The chart below shows you the focus areas: the majority of funding rounds went to companies focused on creating HCM & Pay solutions. Remember that in early February I wrote about the $0.5B of investment flow into this area, and the pace hasn’t slowed since.

In the past year we’ve also seen how important the Health & Wellness space has become. Companies are buying more solutions to support their employees with mental and financial health issues. Investors took notice – this category received around $1B in funds.

The HCM & Pay Space can be divided in a couple of subcategories. Companies that develop an HCM Suite with payroll included received the bulk of the investments.

The Global Workforce category came into its own last year. These solutions help companies manage and pay their workforce, and include EoR and contractor services for remote workers. Some of them are relatively young, like Oyster ($70M) and Omnipresent ($15.8M), while others like PapayaGlobal ($100M) have been around for a while longer.

And as remote working becomes more prevalent, it’s clear that Global Workforce solutions will only become more critical. So expect to see more growth and investment in this area.

The other category that is rapidly growing is On Demand Pay. These companies help employers manage earned wage access requests. They are especially interesting when the current payroll provider doesn’t offer that feature (yet – which is a risk to their existence). Examples are Payflow ($1.2M) and Clair ($15M).

Other: from Pay Equity to APIs

I want to call out that the category Other holds a couple of companies focused on achieving Pay Equity and eradicating pay disparities like Syndio ($17M). With the renewed attention on DEI and workplace fairness I expect we’ll see more investments towards solutions that focus on this particular topic.

A couple of young companies understand the value of employee data, while bringing standardization to HRTech. They develop APIs to move data more easily to and from your payroll and other systems. Check ($35M) and Pinwheel ($20M) both fall into this group, and are currently listed in Other. I’m curious to see if other companies will join them this year, and they will form a separate subcategory at the end of 2021.

Even though there are a few companies that develop a cloud payroll, there aren’t many independent startups who decide to focus on this space and it doesn’t attract a lot of investment. The lead times to develop a solid, global payroll are long and you need to have a deep understanding of the process in every country you include: the barriers to enter remain high.

Administering and paying people remain heavily regulated, local processes. And even though HCM Suites are more often designed to manage a global workforce, you need to incorporate local knowledge into payroll and time solutions.

A final insight about the HCM & Pay space is that companies who build these solutions are relatively well spread over the globe. And even though there were no funding rounds in Africa during this period, the continent does have several companies building HCM & Pay solutions.

During the pandemic it became clear that employers need to pay more attention to the mental, physical and financial health of their workforce. This is a global issue and young companies around the world are introducing solutions to support people with health & wellness issues.

In the past 6 months, 14 companies raised more than $1B. More than one third of this amount was raised by Lyra Health in two funding rounds, totaling $387M. Elsewhere in the world Koa Health received $35.4M in Spain, while spectrum.life took in $3M in Ireland and Spill raised around $2.7M in the UK.

Every report looks at the HRTech space a bit differently, so what is the scope of my HRTech research?

During the pandemic, a new category called WorkTech emerged, which combines HR solutions with other systems that support the digital workplace, like experience and productivity platforms.

While I understand the approach, I continue to focus on HRTech: the solutions that directly support the HR or People function and are most likely to be procured by CHRO’s and their teams.

That means that I exclude the following solutions from this overview:

To establish the overview, I track investment news from many sources across the world, in a couple of languages. I am aware that the list is not complete: e.g. because a company doesn’t publish a press release – this happens more often than you think – or the investment is private. Nevertheless, if you think a company is missing, or you want to check if it was included, please reach out.